skip to main | skip to sidebar

I recently wove a rag rug as a guild challenge.  I used 8/4 cotton carpet warp for the warp and yarn weft and cut up t-shirts for the rags.  I was asked how I turned a shirt into a ball of rag weft.  I thought I would show how I prepared the fabric strips.  I got the idea of how to do this from The Rag Rug Handbook by Janet Meany.

I started with a t-shirt and cut off the body from just underneath the sleeves.  The tube body was turned 90 degrees so that the open edges were on the sides and the top and bottom facing me were the tube sides.  I folded the bottom onto almost the other side on the top but not matching the edges.  I left 1-2 inches between the two edges.

With a rotary cutter, I cut 1 inch portions of the two layers of the shirt body up to about ½ - 1 inch from the top edge.  (Don’t cut all of the way through or you will just have loops.)  The width of these strips are up to you and the project you are making.  I cut 1 inch strips all of the way across the folded fabric. 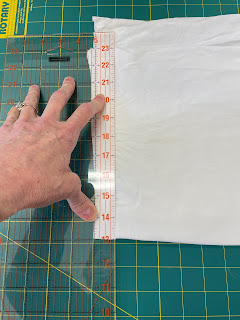 The next step is also a bit tricky.  I opened the folded fabric and inserted my plastic ruler, just to separate the layers.  From the left edge, I cut up to the right side of the first strip.  I continued to cut the fabric in the same manner until all of the shirt is cut.  When this is finished, if all goes well, the shirt body is one long strip and I wind it into a ball, ready to be used for weft rags.

I like t-shirt material for rag rugs because they are squishy and pack in and there are lots of colors of shirts.  For the rug I made, I used t-shirts that had been my mother’s.  A nice remembrance of her. 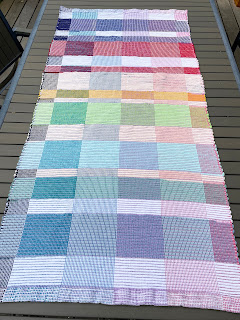 Another Year of Pandemic Towels

20211 has been another year of spending time at the loom.  I've been doing some different things with the towels I've woven as well as visiting tried and true approaches.  I was motivated more by weaving challenges and classes this year.

A lot of people have been weaving Susan Poague's Turned Taquete' circles.  I finally succumbed to this structure, which can be a lot of fun, because of a group challenge to weave something using the 2021 Pantone Colors of the Year.  This design was adapted from her article in Handwoven Magazine, May/June 2019, pg 46.  It was woven on 8 shafts with 10/2 cotton for the warp and weft.

Another challenge this group suggested was to weave something in linen.  When I think about linen, I normally think about towels.  I also think about lace structures.  These were woven using 16/2 linen for both warp and weft for all but one of the towels.  For the first one, I decided to use 10/2 cotton just to make sure things were working well.

Another group I belong to decided to use US National Park posters as color inspiration for woven pieces.  I picked the US Virgin Islands as my inspiration.  These towels were woven with 10/2 cotton for the warp and weft in six different colors.  The structure is a fancy point twill, treadled in a couple different ways, for each towel.

I next took a break from challenges and did a bit of free-hand colors.  I have most of my 10/2 cotton yarns sitting on top of a bureau and while I was weaving over the course of a week or so, was looking at one corner of the colors.  They were all kind of neon and pastel.  The colors reminded me of the textiles from the 60's.  So I used those colors for the next group of towels.  The towels were threaded to an extended point twill and woven with various treadlings on 8 shafts using 10/2 cotton.

Recently, I became interested in a weave-along with Tien Chiu and Michele Belson dealing with gradient colors in weaving.  The weave-along was intended for napkins, but I couldn't resist weaving towels instead.  These had a red and yellow 10/2 cotton warp in a series of curved gradients.  I used a number of different colored 10/2 cotton for weft, including yellow, very light pink, magenta and fuchsia.  The structure is straight twill on 8 shafts woven with a 2-2-1-1-1-1 tie-up.

A couple of towels from the "vault".

I have found over the years that there was warp left over from a towel run - not enough for a towel but too much to just throw away.  I hemmed a bunch of these and they are bread cloth size. 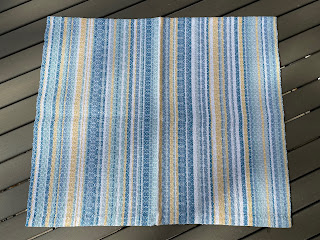 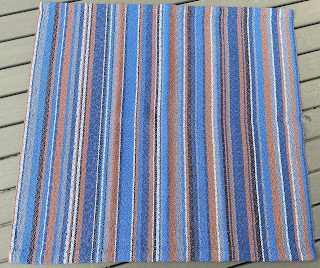 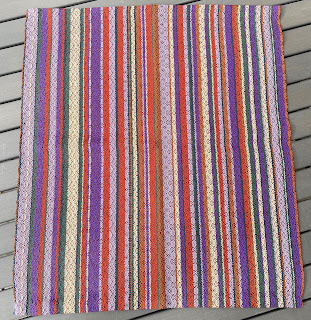 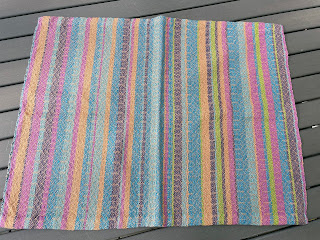 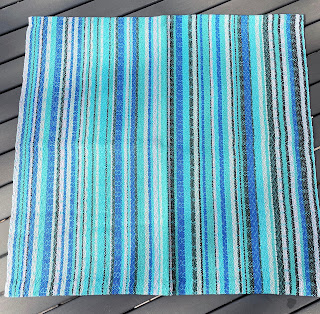 Towels are a great way to play with color.  I'm sure there will be more next year.

Posted by Ingrid at 3:55 PM No comments:

I guess we all thought that we would be long finished with COVID by now, maybe soon. But I have continued to wade through my yarn stash and have been making scarves while mostly at home. I've just about used all of my available tencel yarn and need to make more inroads into the silk.
I started off 2021 finishing off the last of my Just Our Yarn 10/2 tencel yarn.  For the first scarf, I need to use yarn from two different skeins fr the warp.  The blue with a little maroon went nicely with the basic blue yarn that I had picked for the warp.  This scarf was treaded to an extended point twill and woven with an advancing point.
The last JOY scarf I was able to weave used more blue-green colors.  For this scarf, I used a "M's" threading combined with the advancing point treadling.
Having run out of JOY yarn, I looked around at what I did have.  I had been working to reduce my stash by either selling or giving away yarns that I didn't think I would use in the near future - or had that "What was I thinking" feeling.  I saw a couple of skeins of yarn - a Noro blend and somewhat heavy silk yarn.  They looked good sitting next to each other, so I decided to give them a try as a scarf.  The Noro was a rainbow of colors and the silk a bright pink.  I used the Noro for the warp and the silk for the weft.
The Noro was threaded to an extended point twill and woven with an advancing point treadling.

The one thing the COVID-19 pandemic has given me is time to weave. It’s amazing how much extra time one gets when all your meetings are just “down the hall” rather than a car ride away. We are all tired of the images of that virus appearing everywhere, but in 2020 it held a bit of fascination from a design perspective.
In the past several years, I have been studying how to use ProWeave software to create weaving designs. Last year, I also was interested to see if I could create a pictural representation of that COVID-19 graphic that had been holding our attention. Using ProWeave, I graphed a picture of the molecule. From that depiction, I was able to “superimpose” weave structures on the positive and negative faces. My “go-to” is a 1/3 and 3/1 straight twill.  These designs were created for 24 shafts.
I also designed drafts for 1/3 3/1 broken twill.