skip to main | skip to sidebar

Scarves During a Pandemic

Finally for this phase of the pandemic, scarves are really the true story.  In March, I wove a silk merino scarf in colors that weren't really my thing.  This yarn was 50-50 merino and silk blend.  I used it in the warp and weft, weaving an extended point twill design.

When we went into self-isolation, I thought it was finally time to start using the good yarn.  I had been promising myself for about five or six years to do that.  I was headed to the silk yarn I have but on the way got a bit diverted by tencel yarns.  I really thought it might be a safer choice on the way to using silk.

Over the years, I had bought several (read many) skeins of Just Our Yarns 10/2 tencel yarns.  They had fabulous colors and encouraged a mix and match approach to weaving with them.  Sadly, the company is no longer in business, but there were those skeins in the yarn bin.

I approached the first scarf in tencel with a bit of trepidation.  I hadn't woven with it before, so I wasn't sure what to expect.  After a little research and discussion with other weavers, I sett the warp at 36 epi.  I chose a fuchsia yarn for the warp and blue for the weft.  These yarns are all variegated, so there is lots of variation in the yarn colors.  The warp was threaded in a fancy point twill and the tie-up was a 2-2-1-1-1-1 twill (as all of these scarves use).

I found that the scarf almost wove itself - so effortlessly.  I was amazed.

I was so happy with the results of the previous scarf and how easily it wove, I decided to weave another one.  The second scarf used a green variegated warp and a rust var. weft.  It was threaded as an extended point twill.

Things were moving so smoothly, I kept weaving scarves.  The next one was a different green variegated warp with a fuchsia variegated weft.

I wove two scarves with doubleweave hems.  This second attempt had twill hem as well as a twill design for the scarf itself.  For this scarf, I used the leftover yarn from the previous scarves as the warp.  I alternated two colors until I ran out of one or the other and added a new color when that left off.  Since there were similar colors in all of the yarns, they all went together.  The threading was a straight draw on eight shafts and the tie-up was a 2-2-1-1-1-1 twill.  Although it only needed eight shafts, in order to create the twill doubleweave hem, I needed 16 treadles, so I wove this on my dobby loom.

Having gotten really comfortable with 10/2 tencel, I decided it was time to weave a scarf with silk.  I chose a pink variegated 20/2 silk for the warp and purple 20/2 from Redfish Dye Works for the weft.  I used an advancing point twill on eight shafts for the threading and a different one for the treadling.  After consulting sources and weaving friends, I sett the warp at 30 epi.

The next scarf was in tencel.  I chose an orange-green variegated for the warp and green-blue for the weft.  The threading and treadling was the same as the silk scarf above.

The last scarf came off the loom this past week.  It was woven with two color ways of blue 10/2 tencel.  The threading was an extended point twill and the treadling an advancing point twill.

I've enjoyed delving into the use of tencel and a little exploration with silk.  I am sure there will be more scarves like these in the future.  I had been weaving scarves exclusively with wool and wool blends.  Here are a few examples of wool scarves. The orange is a blend of sock yarns.  It was threaded as an extended point twill with the 2-2-1-1-1-1 tie-up.  In addition to teh twisted fringe, I added some beads. 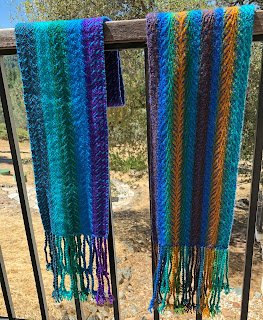 I'm sure we will be in self-isolation for many more months, so I'm looking forward to more exploration and more scarves.

Your color blends are gorgeous. I love the textures resulting from your different patterns. Outstanding work Ingrid. You have used your covid isolation well! DIANE

Holy cow, you are a weaving machine! You must have run out of butter :-). What’s your favorite width and length for scarves. I plan to weave a couple for Christmas presents. Thanks.